On the first day of the Predictive Analytics World the shorter lectures on the fringe of the keynotes are particularly compelling.

As expected, Amelia Showalter's presentation on Obama's digital presidential election campaign was one of these highlights. For example, it was very interesting to see that the so-called 'voter file' contains very many datasets even before it is enriched from other sources. On this basis, it can be reproduced who took part in which election at what time (which indirectly allows conclusions about the moving frequency, at least for frequent voters), who registered as supporter of a certain political party (in order to participate in the primary elections) and the various socio-demographic data of a voter. The stories from the campaign were just as exciting. For example, the one of a campaign supporter who, due to Obama's analytics team, received an exact round sequence of the households she was to visit, each with a specific mission: In one particular household, she was to try to convince the people of Obama by addressing certain specified topics. Another household had registered for a postal vote and was considered to be a clear Obama voter according to the previous scoring. In this case, the campaign supporter was to remind the whole household of handing in the documents etc. The fun thing was that across the street there was a team of republican campaign volunteers who knocked on each door, always recited the same slogans and often encountered closed doors or firm Obama followers.

Robot Journalism by Means of Machine-Engine-Learning

The lecture on robot journalism by Marcel Hager and Alexander Siebert also was particularly exciting. It was about automatically generated game reports for the lower football leagues; due to the great number of these games in Germany, not all games can be accompanied by human reporters. In Germany, there is a total of 1,571 (!) amateur football leagues. There are 60 leagues within the distribution area of, for example, the Fuldaer Zeitung alone. Usually, there are no game reports on these games, at least none which are created by human beings on a regular basis. However, there is the data of the games. Not only the result but also yellow and red cards, goal scorers, substitutions etc. On this basis, one can actually create short reports, the quality of which is hardly inferior to the ones created by human beings. In order to do so, one prepares a sample of training texts (including manually recorded additional information) by extensive, largely manual work; then one trains a machine learning model using this sample. The machine learning model learns, so to speak, the style of writing, the order in which information is presented etc.

As a further ingredient, the rules and characteristics of the game and league have to be modelled, again by extensive, largely manual work. The result is a model which is able to translate game data into short reports. If you want to get an idea of the quality, click e.g. here: fussifreunde.de for such game reports.

The Customer Lifetime Value (CLV) with b.telligent and mytoys

Last but not least, I also gave a presentation together with Juliane Homuth from our customer myToys. It was about our customer lifetime value project which we implemented at the beginning of the year. The presentation was a lot of fun. An audience that is so committed and competent as the one at the Predictive Analytics World is extremely rare at other events. Accordingly, the questions and discussions arising in the subsequent coffee breaks were very productive and exciting. 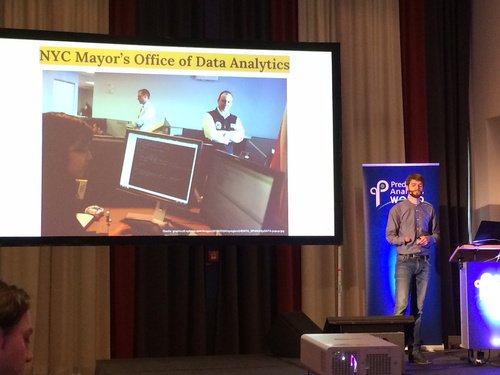 New York's mayor has a "Mayor's Office of Data Analytics" which actually saves lives. Who would have thought that!

After today's interesting presentations, I am already looking forward to tomorrow!