With the new version, significant innovations have been implemented in arcplan 8 which have a very positive influence on future projects involving the arcplan product suite.

The new HTML5 client and the responsive design must be mentioned here. They make developments of BI applications for mobile terminals significantly more efficient; this also applies to desktop applications.

Comparison between Java Client vs. HTML5 Client plus DORA 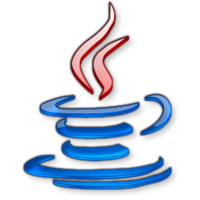 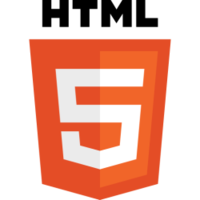 So far, many arcplan customers have used the Java client. Empirically, this has been the most common to date as a lot of businesses use Java Runtime as standard. Within the course of various Java security gaps, many IT departments have now questioned Java, which is why it is worthwhile to look into the arcplan innovations.

With the HTML5 client, arcplan has included a new technology into the product portfolio. This technology makes it possible to provide applications not only for desktop computers, but also for various mobile terminals, so that other than a modern internet browser, no additional components such as Java or a native app have to run on the terminal.

With the HTML5 standard, it is, of course, also possible to integrate external contents and mashups into the application easily and seamlessly, even better than it used to be possible with the Java client. Thus, the flexibility for the developer of the arcplan applications is greatly increased; infinite expansion potential is available if the substantial arcplan standard were to be insufficient in an individual case. For example, services such as Google Maps can be integrated easily, which can enrich the display of maps and regional evaluations.

arcplan 8 also features the integrated responsive design, i.e. the display on the various terminals responds to the respective resolution and automatically adjusts thereto. You can build documents which dynamically and automatically adjust their layout to each terminal, from desktop computers to laptops to smartphones and tablet PCs.

Thanks to the responsive design concept of arcplan, you can:

The special advantage here is that you no longer have to build separate applications for the various resolutions; rather, you can develop one application for all resolutions/terminals.

arcplan estimates the potential savings which the DORA concept generates as compared to developments per terminal at up to 70%.

For this purpose, arcplan has introduced the so-called “views”, a method by means of which the developer can prepare existing arcplan documents for all required resolutions. 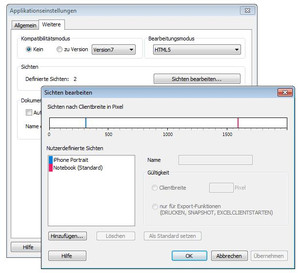 If various views are defined (e.g. “notebook”, “iPhone portrait” etc.), existing structures and objects can be adjusted to each individual view and re-aligned. The views for each terminal are independent from each other; arcplan provides the layout information per view. Special print views can also be generated.

Accordingly, the developer does not have to “reinvent the wheel each time”, but can resort to existing data queries and objects, which means that he saves a lot of time. The pixel-level preparation of the reports will probably take the most time, but this would also be the case with a specifically developed smartphone app.

Here you can see an example for the different views of the same arcplan document, once in an iPhone view and once in a desktop view (Internet Explorer).

One can see that the display in the mobile segment is different from the display in the detailed desktop view. By contrast, the data queries and most of the objects could be re-used. The simple mobile view was added to the original document within a very short time. 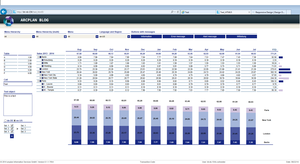 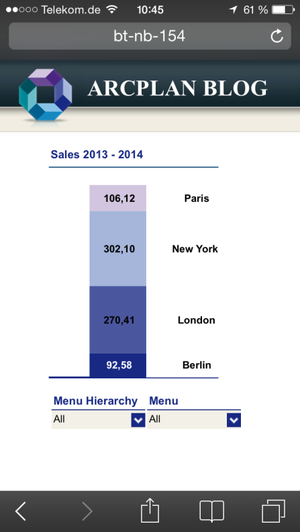 Differences and Commonalities between Java and HTML5 Client

Before you make a decision between the Java and the HTML5 client, however, you should know the differences and the commonalities.

To begin with, it can be summarized that there are no substantial differences in the display of the various clients, so that without hesitation, reporting can be realized with both clients.

The technologies are now compared.

The display of the hierarchy menus differs as follows: 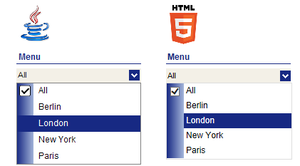 Within the HTML5 client, it is not possible to use separate icons for node elements. Further, the “tree lines” are not provided within the HTML5 client. Only the level colors of the icons can be adjusted (as you can see in the screenshot). The HTML5 client does not feature a highlight effect when one drags the mouse across the lines. Also, there is no color gradient on the left corner of the dialogue box. The menu icon itself, however, can be parameterized in both technologies.

Both clients feature multiple selections. The layout differences are as follows: 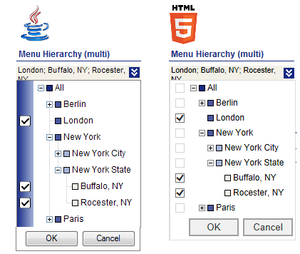 The menus are displayed almost identically within the two clients.

It must be noted that the “normal” menu objects support the native GUI elements of some mobile terminals (e.g. iPhone, iPad); this, however, is not the case with the menu hierarchies, as within the HTML5 client, they are rendered in a form which is comparable to the display in the standard browser.

Illustration 8: Differences between Hierarchy vs. Standard Menu within the HTML5 Client

Both the Java and the HTML5 client in the current arcplan version allow the display of numbers contingent on region and language.

This is a material innovation, as before, the display was linked either to the server or to the client settings. Now, a multilingual application can be realized much more comfortably.

The following screenshot shows the various possibilities of dynamically adjusting date and number displays. This works faultlessly in both clients. 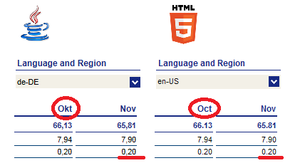 With the exception of the absent tree structure, the display of hierarchies is not materially different. 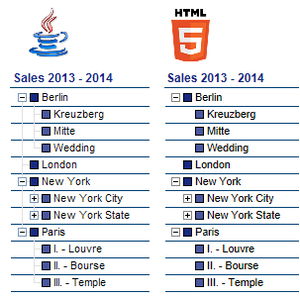 The dialogue boxes which may be offered in the application are significantly different.

For example, within the Java client, the information and error messages correspond to the development environment and the Windows environment.

Within the HTML5 client, the messages are displayed with a standard layout which looks identical on all terminals. 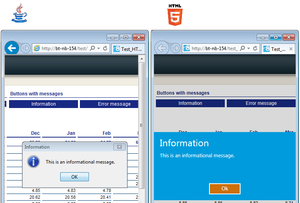 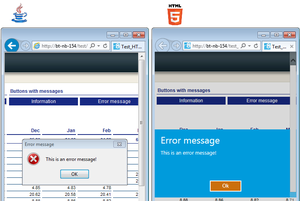 Individual graphics are displayed in almost identical manner within both clients.

Also, highlighting individual areas in case of a mouse-over works almost identically. Only the intensity with which other datasets are faded into the background varies slightly, but not significantly.

Differences exist with regard to the tooltips which are displayed e.g. as information in case of a mouse-over. The tooltips within the HTML5 client are rather similar to the operating system tooltips and seem to be integrated into the browser in a better way. In case of mobile terminals such as the iPhone, such a mouse-over effect is not possible.

Illustration 13: Comparison of Tooltips and Graphics

The manner in which data can be entered into the clients differs, in some respects significantly.This is relevant primarily for planning applications: as soon as the objective is defined, the right client should be chosen. Mainly the input of a great lot of datasets in table format differs significantly between the technologies. While this is intuitively similar to Excel within the Java client, the entry into the HTML5 table objects is less pleasant.Entering Data into Tables

When entering data into tables, the use of the keyboard differs significantly.

In tables within the Java client, one can jump from cell to cell with the tab stop or the arrows of the keyboard in order to e.g. jump to the next line after entering data with the enter key.

Within the HTML5 client, one has to click on a cell in order to make the entry. This step is necessary again with the next entry. It is not yet possible to navigate within the object with the arrow keys. 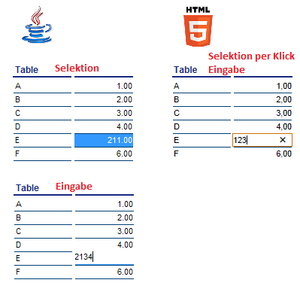 Entering data into individual cells does not require any navigation with the arrow keys. Thus, it does not significantly differ between the technologies.

The selection of the individual cell is slightly more visible within the Java client as the field is highlighted in blue. Within the HTML5 client, one jumps into entry mode right away. 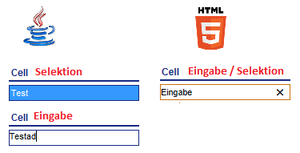 The Java client has the advantage that text can be formatted. This is not yet possible within the HTML5 client. 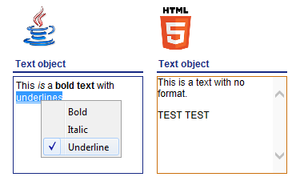 Entries into Control and Option Fields

With regard to the layout, entries into control and option fields differ only slightly from each other.

For planning applications where a lot of data is entered into table objects, the Java client is still recommended as it enables a more pleasant navigation within the data.

Further, within the Java client, it is possible to access the views (DORA); however, it is only within the HTML5 client that the display is adjusted absolutely seamlessly in case the resolution changes. This can be noticed e.g. when turning the terminals such as iPhone or iPad.

With the new HTML5 client, arcplan has included an impressive new technology into its portfolio which revolutionizes and simplifies the development of arcplan applications for various terminals.

The evaluation of the new HTML5 client should be worthwhile for each new project with reporting or a dashboard; it offers real added value for pixel-level reporting on multiple terminals.

In combination with the responsive design (DORA), the HTML5 client smoothly supports various terminals and simplifies the realization of applications.

Learn more about arcplan or visit the arcplan training center in Munich. 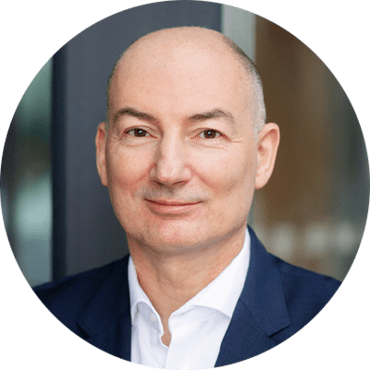