Visualizations in reports (and what needs to be considered here)

When preparing reports, we repeatedly face the challenge of processing large quantities or complex information in a way which is clear and comprehensible for the report's consumers. Visualizations in the form of diagrams and charts can serve as an effective means here.

In this article, I would like to point out some important aspects which need to be taken into consideration when creating visualizations in reports, so as to achieve meaningful communication.

First of all: The advantages and disadvantages of individual chart types are not dealt with for the time being.

The more, the better?

I, too, have been requested in the past to kindly "add another colourful chart to the report so that it doesn't look as boring". But is that really our goal when it comes to reporting? Are reports really meant to entertain? Or should our efforts instead focus on communication of information or a statement? Admittedly, this question is purely rhetorical, but it highlights the first, fundamental issue we tend to overlook when creating visualizations in reports: Is visualization really needed? Report recipients, like the rest of us, are inundated with information. More and more reports need to be viewed, understood and integrated into decisions in an ever shorter period of time. Displays which do not contribute clearly to a report's statement (i.e. serve merely to illustrate or provide redundant information) only create confusion and waste valuable time. The premise "less is more" therefore applies not only within a chart, but fundamentally also when designing reports.

If we have decided that visualization of certain information will prove useful, we should think about the related content. What should be the "scope of analysis", i.e. what range is needed here to give the viewer a correct and appropriate picture. Which period is to be considered in the time series? Are the last three weeks enough, or should we depict half a year? A fine example of the relevance of scope is provided in the Süddeutsche Zeitung newspaper from August 2018.

Donald Trump had previously proclaimed that the US was experiencing in many ways "the best economy in American history," and took credit for this recovery. If we assume that unemployment rate is an indicator of a "good economy," and we look only at the period of Donald Trump's tenure (see Figure 1), it might indeed create the impression that the upswing is rooted in his tenure. Though the data presented would not be "false", their scope would be insufficient to warrant or support the above-mentioned claim. They do not give the reader the opportunity to see the statement in a wider context. Only when the period is lengthened does it become clear that the recovery began long before the beginning of his term of office, and is only a continuation. 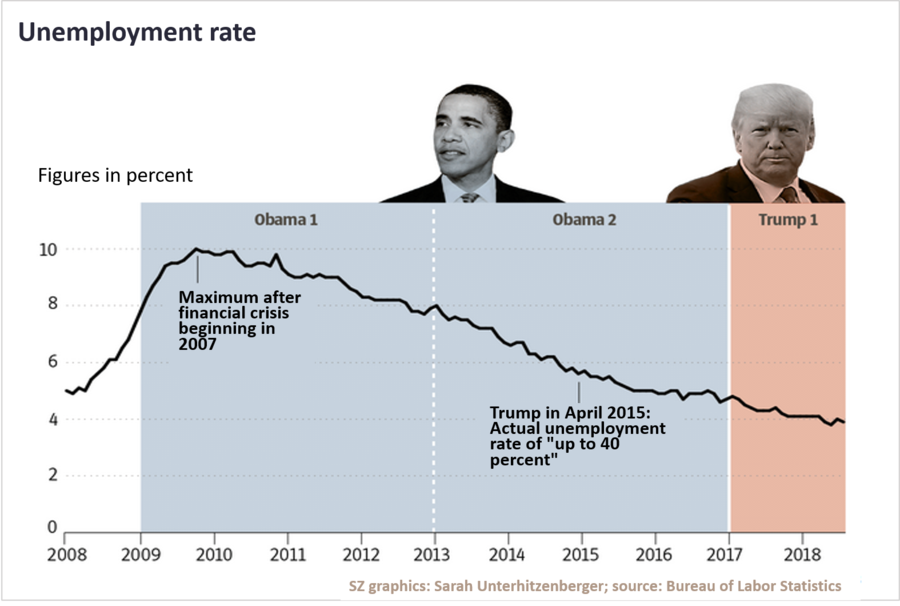 Figure 1: Development in the unemployment rate in the USA from 2008 to 2018 (Süddeutsche Zeitung)

The ability to use a chart to derive conclusions (and, thus, measures and actions in a second step) therefore depends to a large extent on the context provided. Especially in the current era, when populist statements are quickly taken at face value, it is therefore particularly important to ensure that visualizations via which we communicate also tell the truth and do not spread "fake news". Entire books are written on this subject (e.g. "How charts lie" and "The truthful art" by Alberto Cairo or "How to lie with charts" by Gerald Everett Jones), so this example is only intended to serve as food for thought.

Time and again, modern reports also exhibit a lack of a suitable context.

Figure 2: Example of a turnover chronology

At first glance, Figure 2 generally suggests that a lot of things have gone well (more on that later). But what exactly does this chart say? Is the development good or bad? Did we expect it? Or is the chronology ordinary due to various seasonalities? These questions remain unanswered. To enable an assessment, we need more context. We have to ask ourselves the question: "Compared to what?" If we extend our scope by e.g. planned values or the previous year's values (or perhaps even both), an assessment already becomes easier. Purely visual data are thus turned slowly but surely into a source of information! 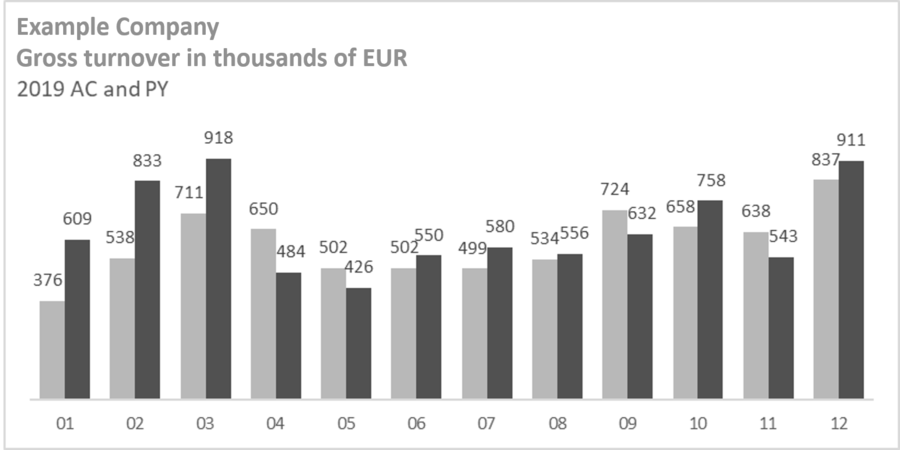 Incidentally, the representations above are to be understood only as examples, because we have not yet thought about the type of visualization and display attributes.

Once we know what to represent to which extent, we should think about the "how?" As mentioned earlier, the choice of the appropriate chart type will not be dealt with here, though this much needs to be said: If a bar chart is the best form of presenting information, for example, then we should also use it – even if there are already several bar charts on the same page. A report's meaningfulness does not depend on the diversity or originality of the employed chart types.

This can't be said often enough in data visualization! However, it's not about the complexity of the presentation, but about "accessories", i.e. a renunciation of everything which does not contribute to the conveyance of information, such as 3D displays, decorative elements, shadow effects, unnecessary lines and axis labels, etc. Only this will make room for the real highlights.

As soon as we have created more than one visualization for a key figure in order to view it from different perspectives, standardized scaling becomes essential to ensure comparability. In this regard, let us take a look at a presentation of confirmed corona cases per country from the WELT newspaper dated 11.03.2020. 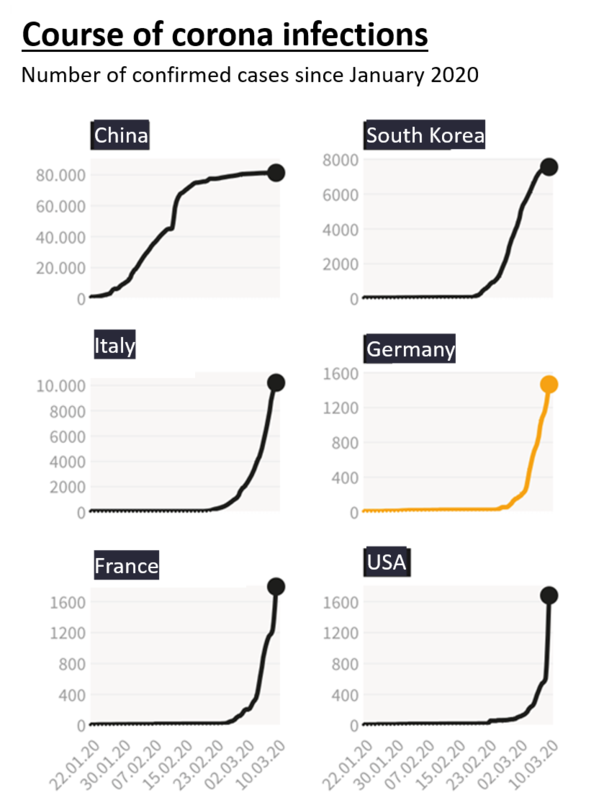 Figure 4: Comparison of Corona infections according to country (Die WELT)

The presentation is sufficient for comparing the different dates on which the first cases occurred in the countries under consideration, but unlike what it is suggesting, the actual figures pertaining to the occurred cases are not comparable. The curve for China is exactly as "high" as all other curves – even though the number of cases is exceeded many times over. The scaling is uniform on the X axis, but completely variable on the Y axis. In order to perform comparisons here, the reader thus has to consider the variations on the Y-axes and mentally bring them into relation with each other.

If we correct this shortcoming from the outset, a different picture emerges (see Figure 5). 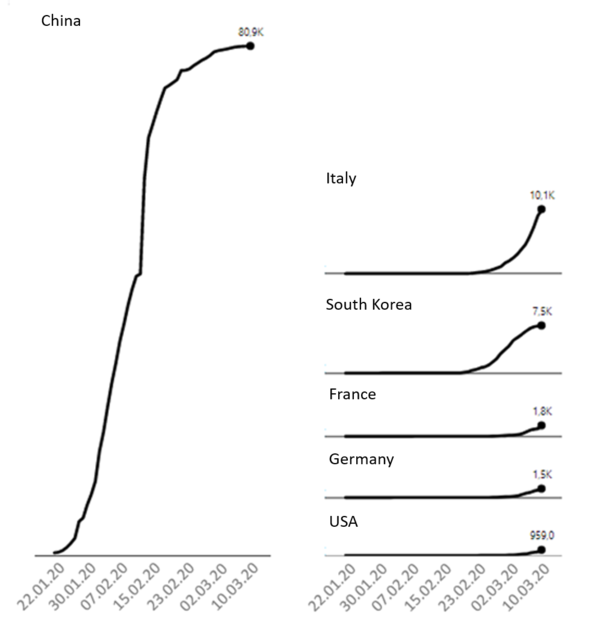 Here we make it possible to compare the individual start times as well as the values attained by the characteristics. Any large differences between the individual categories of such a representation (known as small multiples), i.e. here the number of corona cases in the individual countries, must also be presented as such. Though this does not always allow a "pretty" representation or categorization, it reveals the truth.

Unfortunately, the topic of standardized scaling has only been taken into account in recent years by some BI tools. The support provided by our typical tools still leaves a lot to be desired.

Where do I place which of my report objects in order to determine a logical sequence for reading them? The answer is obvious: In the order in which we are used to reading (at least in Western cultures) – from top left to bottom right.

... and also makes work easier for the report designer, because standardized features do not require later reorganization. Some of the features suitable for standardization:

These standardizations are best laid down by binding rules in a style guide.

Of course, the list above is only an excerpt. With their "Unify" rule, the International Business Communication Standards (IBCS®)  are significantly more elaborate, especially in this regard, and also provide for standardization of individual analysis types, scenario comparisons, comments, etc. With respect to these issues as well as the others which we have touched upon here, it is worth looking at the SUCCESS® formula of IBCS®(https://www.ibcs.com).

Do you want to revise your reporting portfolio and take it "to the next level"? We will gladly support you in establishing the aforementioned style guide. Together, we will develop the content and representation forms which suit your company, and support you in creating templates for your reporting system. As tool-independent consultants, our experts will help find the most suitable solution for you here. My colleague Stefan Kersten and I are also at your disposal as two IBCS®-certified consultants. 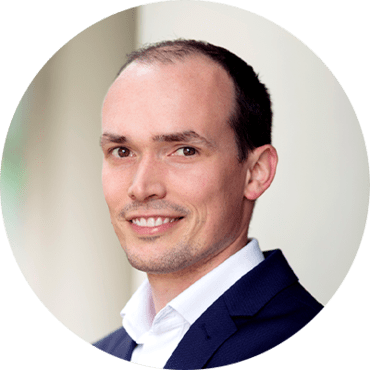