Pop-up menus are frequently used in arcplan in order to offer the user of an application a content-based selection of a value. They are often used in connection with data entries which allow only for a specific value range, or serve to facilitate the selection of a desired action when clicking upon an object.

It is often the case here that the user-friendly presentation of the contents of the pop-up menu is ambivalent.

Since the selected row number cannot be reflected in pop-up menus – as is customary with the other menu object (CURRENTROW()), clarity of selection must be ensured in another way. In the following, the problem of a pop-up menu will be described using an example with fictitious personal names, and a practical solution will be introduced.

The problem of ambiguous pop-up menus

In the described situation (see image 1), the user is provided with a selection of personal names via the pop-up menu. This selection will be written into an individual field for further processing and it is difficult to allocate it in the aftermath as the contained texts which reflect the return value of the pop-up menu are not clear. Thus, in practice, it must be ensured that people with the same names can still be technically identified clearly. 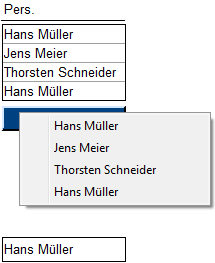 The tried and tested solution to the problem

In order to ensure clarity within the pop-up menu, the name (e.g. Hans Müller) may be prefixed with an unambiguous key. In this case, it is the personnel number (4611HansMüller). It is decisive that the number maintains a fixed amount of digits in all entries. In our example at hand, the personnel number always consists of four digits. For the pop-up menu, the following spreadsheet is used as basis in order to ensure the clear identification:

In order to hide this technical information from the end user, the somewhat hidden function of “minimizing” may be used in arcplan.

In the pop-up menu, this configuration cannot be executed, but the “minimizing” may be reached via a configuration of the underlying objects. Here, the entry „\04“ under the format setting „Prefix“ – as depicted in the next image  - ensures the desired effect: the first four signs are minimized and are thus not visible to the end user. 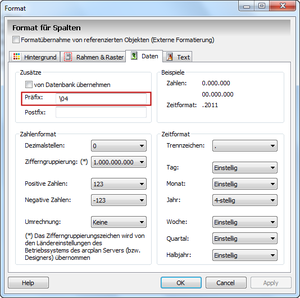 Thus, the four-digit key is eliminated for display, but continues to exist in the background.

After running the pop-up menu, the complete content of the selection is thus displayed again. In the following image you can see that the key is also shown in the resulting object. Thus, the selected entry can be clearly identified by the key. 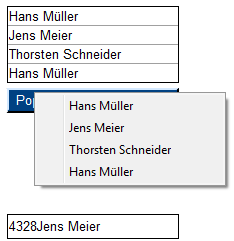 Other variations of the function “minimize”: 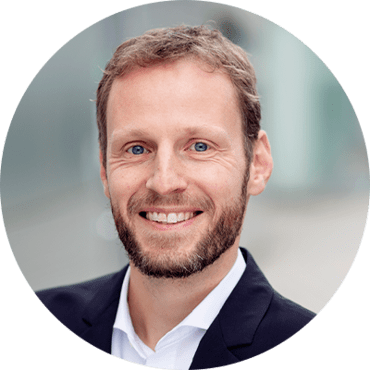