Users do not always leave behind enough personalized information along their customer journey. For instance, new customers can be acquired or existing customers might browse an e-commerce website without being logged in. Non-personalized recommendation systems, such as those based on proposals for products frequently purchased together, still offer recommendation opportunities for companies in this case. However, the more individually these are tailored to the customer, the better. Therefore, in the following, personalized approaches are presented which learn the preferences of customers. To understand these methods, it is helpful to consider the recommendation problem at hand as a sparsely populated matrix. The rows represent the users, the columns represent the items. Whenever a user performs an action for an item, a respective entry is recorded in the matrix. Otherwise, values remain absent and do not need to be explicitly stored. This is illustrated best in the following diagram: 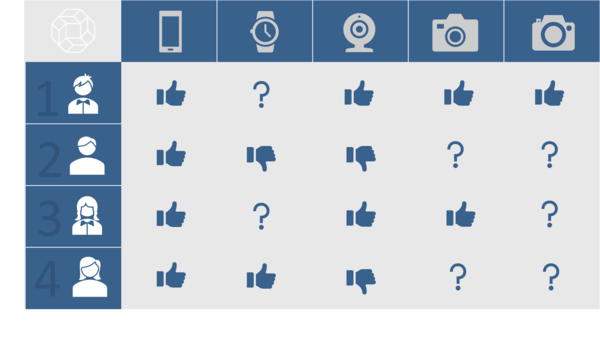 The rows represent different users who have expressed their opinions of various products as a like or a dislike. However, many of the users' interests remain unknown in practice (symbolized by a question mark in each case). Recommendation systems can be used to predict the answers to precisely these questions, i.e. to determine yet unknown preferences for items. This purpose is achieved by the following algorithms, among others.

There are also other types such as hybrid recommender systems which are a combination of several approaches, as well as knowledge-based recommenders which, for example, rely on coded knowledge and provide the user with a step-by-step, rule-based assistance in making decisions.

A live evaluation and, if necessary, a user survey are most effective for assessing a recommender's success. However, it is very helpful to evaluate a recommendation system offline before deployment. The best measure for such evaluation depends on the use case. Often, the accuracy of the resulting recommendation list is of interest. Precision and recall are among the most important measures here. Precision specifies the proportion of recommended items relevant to the user (for example the fraction of products purchased after recommendation), averaged over all users. Recall indicates how many of the items relevant to the user have been selected. Both measures can be determined for different (top) thresholds. A relatively high precision value can be achieved by recommending the most popular items overall. However, this could ignore the existence of many more relevant items for specific users which depend on their special interests. A high recall value attempts to describe this.

For use cases in which recommendations are not presented side by side, but as a list sorted in descending order, ranking measures such as the mean reciprocal rank and normalized discounted cumulative gain are also available. The idea here is that the topmost output items need to have a higher weight because they are perceived more readily by users.

In addition to the aforementioned metrics, it is often useful to define an evaluation function tailored to the problem and, if possible, also a target function to optimize.  This way, the requirements of a given use case can be taken into consideration more thoroughly, e.g., so that profit and revenue targets can be directly taken into account by the resulting recommendations.

You would like to know more details about recommender systems? As an introduction to the basics and concepts of recommenders, the book “Recommender Systems: An Introduction” by Jannach, Zanker, Felfernig and Friedrich is a good reference. More detailed descriptions of algorithmic approaches and the newest developments in the field can be found in scientific publications. For example, those articles published in the yearly RecSys conference, which specifically addresses recommendation methods and applications: https://recsys.acm.org/.

This blog post served as an overview of the different methodologies used in recommender systems. It is advisable to first implement a simple approach in a short project. This can already deliver good results in practice, and also enables a better understanding. Depending on the outcome, advanced machine learning methods can be used subsequently.