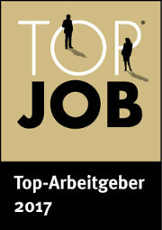 Munich, 22 February 2017 - At b.telligent, the employees enjoy a unique workplace culture with excellent working conditions. Because of this, on 17 February in Berlin, the consulting firm was presented with the famous "Top Job" seal from the former German Federal Minister of Economics Wolfgang Clement. In particular, the "Top Job" mentor praised b.telligent for the strategic orientation towards sustainably securing skilled personnel by increasing its attractiveness as an employer. For the owner-managed, technology-independent consulting firm for business intelligence, CRM, DWH and big data, it is already the second accolade as a top employer in Germany.

In particular, the topic of employer attractiveness is highly significant in the field of consulting, because in almost no other field do companies have to fight with such a high rate of fluctuation. The fact that personnel strategy is working out at b.telligent is not just proven by the number of employees, which has rapidly increased each year since its founding in 2004 from three to currently more than 125 employees, but also the opening of new locations in German-speaking Europe. In addition to the headquarters in Munich, in recent years, branch offices have been added in Düsseldorf, Hamburg, Stuttgart, Zurich and, since the end of 2016, Frankfurt am Main - additional locations are already being planned. In doing so, b.telligent is not just striving towards customer proximity, but additionally wants to offer all of its employees the possibility to establish themselves in a single location, despite the consulting business and therefore limit travel as much as possible, if desired. Within this framework, b.telligent is also implementing various measures for the reconciliation of work and family.

"We are very proud of being distinguished with the 'Top Job seal'", reports Sebastian Amtage, one of the two managing directors. "And, of course, we are also pleased that our commitment to the workforce is being honoured in this way. Right now, for the concept of a consulting company, it is important to understand that the company doesn't 'have' employees, but rather 'is' its employees. We don't just follow this philosophy; rather, we live it every day. Every employee plays his part in the development of the company. This knowledge motivates them and I am pleased to see the b.telligent family continue to grow."

"The 'Top Job' accolade represents a sustainable workplace culture, which is equally healthy and performance-oriented. Through inspiring leadership, b.telligent is able to create a trustful relationship as well as good working conditions for a positive climate of innovation and performance. In general, at this year's 'Top Job' company, we are recording an above-average increase in profit, by an average of 20 percent. This once again emphasises the entrepreneurial and strategic importance of employer attractiveness", Silke Masurat, Managing Director of zeag GmbH, has judged.

The "Top Job" comparison of companies

With "Top Job", medium-sized companies have been working on their qualities as employers since 2002. The project includes a seal, with which the best employers can make their qualities visible. The project is organised by zeag GmbH - Centre for Employer Attractiveness, with its headquarters in Constance, on Lake Constance. Prof. Dr. Heike Bruch and her team from the Institut für Führung und Personalmanagement [Department of Leadership and Personnel Management] at the University of St. Gallen. The project's mentor is former German Federal Minister for Economics D. Wolfgang Clement.

The Centre for Employer Attractiveness was established in 2015. Under the umbrella of the Centre for Employer Attractiveness, the former compamedia managing director and founder of zeag, Silke Masurat, is leading the projects "Ethics in Business" and "Top Job". In doing so, zeag accompanies medium-sized business who are already performing well in terms of the areas of personnel management and corporate social responsibility or would like to achieve it over the medium term.